For many young actor auditioning for an acting school can be a daunting task.  Needless to say, graduating from the right institution will heavily influence what you can do after drama school. Here are some tips on how to successfully audition and raise your chances of getting into your dream establishment.

Two major don’ts to start off. First, don’t look for pieces in monologue collections. Second, don’t trust the internet to provide anything worthwhile either. Also, it is recommended to stay away from movies and tv scripts and instead find good monologues for your drama school audition from plays. Oftentimes, candidates are asked to perform two contrasting pieces: one classic, one modern.

So how do you properly choose a monologue? Don’t simply pick something off the internet. While not being a bad idea in itself, it is more likely than not that many other people will be looking at the same materials as you. This not only ruins your chance to stand out, but also can cause the panelists to lose interested as they’ve seen this monologue performed again and again. Moreover, just printing something off the internet might suggest that you weren’t willing to do your homework and do serious research. 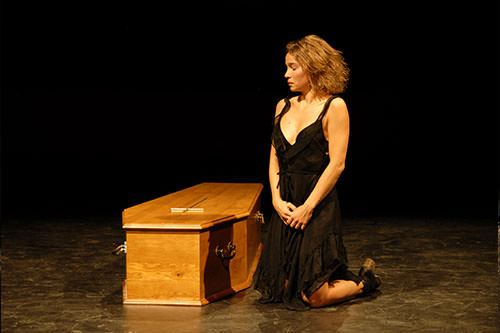 Once you've selected a monologue make sure you read the entire play it was taken from. It is important to understand in what context the scene takes place, and the relationships between the characters. The panel is likely to ask you why you choose that particular piece, what is its purpose, and what it means to you on a personal level,

Make it easy on yourself and be natural. Find a piece that means something to you, that you connect with and enjoy. Don’t try to put on accents you don’t master and try to find a character that is a similar age as you. Choose a piece that inspires you to work, not one you think people would like to see.

Being well-prepared is another efficient way to ease your mind. It will also better your odds of getting into a drama school.

Don’t simply learn your script by heart, practice in front of other people. It will give you an idea of what performing in front of the panel feels like.

As obvious as it may sound, it is paramount that you know your lines perfectly. If you think that you learned them well, think again. It should take you absolutely no effort to remember your lines, as you will need all your energy and concentration to perform. An effective way to test yourself is reciting your lines while doing something else.

Also, you should be ready to answer the most common questions asked during an audition.

What should you wear? First of all, make sure you put on something you feel comfortable with. Avoid vibrant colors or revealing clothes. You don’t want the panelists to get distracted or worse feel uncomfortable, but instead focus on your performance.

Plain colors are preferable, but avoid being fully dressed in black. Picking your outfit is as another opportunity to show your personality, wearing nothing but black has the opposite effect.

Jewelry and makeup are likely to be considered as superfluous adornments, keeping them to a minimum is recommended.

4. How to deal with audition nerves?

What if the panel gives you directions you didn’t expect? What if you forget your lines? First of all, don’t try to fight back your audition nerves. It will only result in a waste of energy and loss of focus. What you can do instead is breathing exercises. Indeed, they can help actors center themselves and reach the state of composure required. One common and efficient way consists in breathing in deeply, then letting the air out both on a count of 4. The key point here is to breath from your diaphragm, because it expands more than your chest, allowing you to take fuller breath and calm your nerves.

5. How to behave in front of the panel?

Performing alone with “imaginary” characters can prove to be unnatural, as no one will read you their lines. Even soliloquies, which by definition only involve one character, can prove hard to tackle. The reason being, they are excerpts taken out of a play, so we lose the general context of that scene within the play.

While you are on stage don’t stare at the panelists. They are not part of the scene, staring at them may cause them to feel uncomfortable. Instead direct your gaze toward the wall behind them. Try to regularly switch between several points, and not focus all your attention on a single one.

Being open also plays an important part. Use what is given to you to naturally reveal yourself  and display your individuality. Remember that the panelists are on your side. They want you to succeed as much as you do. They are not chasing confirmed experienced actors. What drama schools look for are students with potential that they can train. Consequently, showing that you are diligent and easily redirected during the audition are likely to be decisive factors.